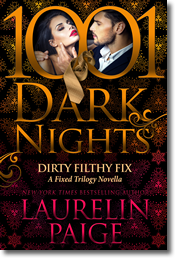 I like sex. Kinky sex. The kinkier the better.

Every day, it’s all I think about as I serve coffee and hand out business agendas to men who have no idea I’m not the prim, proper girl they think I am.

With a day job as the secretary to one of New York’s most powerful men, Hudson Pierce, I have to keep my double life quiet. As long as I do, it’s not a problem.

Enter: Nathan Sinclair. Tall, dark and handsome doesn’t come close to describing how hot he is. And that’s with his clothes on. But after a dirty, filthy rendezvous, I accept that if we ever see each other again, he’ll walk right by my desk on his way to see my boss without recognizing me.

Only, that’s not what happens. Not the first time I see him after the party. Or the next time. Or the time after that. And as much as I try to stop it, my two worlds are crashing into each other, putting my job and my reputation at risk.

And all I can think about is Nathan Sinclair.

All I can think about is getting just one more dirty, filthy fix.

An Exclusive Interview With Laurelin Paige:

Oh my. I loved Trish and Nathan! How did you choose them for this book?

I always thought that the woman who kept Hudson Pierce organized had to have a fascinating inner life. And I’m always the first to raise my hand for a naughty secretary. I knew I wanted to give Nathan a story that was as unique as he is, and the idea of the naughty secretary was only the beginning of what Trish ended up becoming for him.

I always feel a part of every story you write. It’s like a movie playing in my head when I read. Do you feel that way as you write them?

I do! My background is in theater, so I think it’s automatic for me to try and fill in scenery and dialogue in a way that feels like the story is unfolding around you instead of just in front of you.

Who would you dream cast as Nathan and Trish?

David Beckham was always my Nathan. I didn’t have someone as Trish, but let’s say a younger Monica Bellucci.

What is the funniest thing that has happened to you recently?

The other night I watched a cover band where the lead singer didn’t seem to know any of the words. He was reading them, for one song, off of a piece of paper, but he’d apparently only written down the first verse, so he just sang it over and over again, in varying degrees of intensity. It was hilarious.

It’s the busiest time of year for me. I have a Hollywood book coming to Audible on January 30th, called One More Time, so I’m spending a lot of time thinking about that and working on teasers. I’m also writing Dirty Sexy Player, about Weston, and half working on the next Hollywood book. All that, and it’s Christmas shopping time!

USA Today and New York Times Bestselling Author Laurelin Paige is a sucker for a good romance and gets giddy anytime there’s kissing, much to the embarrassment of her three daughters. Her husband doesn’t seem to complain, however. When she isn’t reading or writing sexy stories, she’s probably singing, watching Game of Thrones or The Walking Dead, or dreaming of Michael Fassbender. She is represented by Rebecca Friedman.