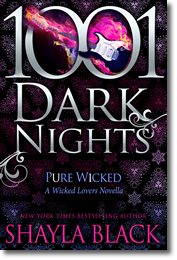 During his decade as an international pop star, Jesse McCall has lived every day in the fast lane. A committed hedonist reveling in amazing highs, globetrotting, and nameless encounters, he refuses to think about his loneliness or empty future. Then tragedy strikes.

Shocked and grieving, he sheds his identity and walks away, searching for peace. Instead, he finds Bristol Reese, a no-nonsense beauty scraping to keep her business afloat while struggling with her own demons. He’s intent on seducing her, but other than a pleasure-filled night, she’s not interested in a player, especially after her boyfriend recently proposed to her sister. In order to claim Bristol, Jesse has to prove he’s not the kind of man he’s always been. But when she learns his identity and his past comes back to haunt him, how will he convince her that he’s a changed man who wants nothing more than to make her his forever?

I completely loved this story. LOVED! What made you choose Jesse and Bristol for this novella?

Thanks so much! Jesse, my bad boy rocker, first appeared—barely twenty-three and deeply immature—in my second Wicked Lovers novel, Decadent. At the end of that book, Jesse’s then-girlfriend, Kimber, chose ex-Army Ranger Deke instead. But I knew Jesse would be interesting…once he matured. So I waited for him to get a bit older and figure out what he really wanted in life. Then I introduced him to once-bitten, no-nonsense small town Bristol. He needed someone real and honest—and he got it.

You may have mentioned this was a bit of a departure for you in your writing. How was the experience?

Because most of this story takes place in small-town America, I wanted PURE WICKED to have that sort of charm. The hero and heroine have an easy-breezy interaction style. They simply get one another. The supporting cast is just a bit south of normal. Throw in some of the awesome places you only see in small towns, like Scooter’s Pizza Shack, and I giggled through parts of this tale. It was a joy to write.

I totally cried when I read the song Jesse wrote and I have to wonder how hard it is to come up with lyrics. Did the words come easily?

Actually, I wrote those lyrics in about 15 minutes with the TV on in the background. I had trouble writing the first line and figuring how to get started, but once I had a few bars down, I somewhat knew what Jesse wanted to say and the rest just flowed.

On the same note, were you humming along to any familiar melody when you wrote it?

Not a familiar tune, just something vaguely country in my head. It came with the lyrics, like they all just popped in together. I’d never tried anything like this before and I actually really enjoyed writing the song. It may not win any musical awards but it came from Jesse’s heart.

You have such a great presence on social media. Is it hard balancing it all?

Thanks! I love social media. I’m a social person, so even this means of speaking to the outside world is fun for me. I tend to plan a few posts in advance because I may often be traveling or deep in writing and forget to post. Sometimes, I just post stuff spontaneously that I think is fun or interesting. My husband and my assistant are good with suggestions. It’s a fun team effort.

Ok, now I know you’re a make-up lover and I always love chatting products and tips with you. Is there one tip you swear by?

I have a few tips I totally swear by:

I know you and Lexi Blake have a great friendship. If you could pick a dream writer’s retreat to head to right now, where would it be?

Somewhere in the South Pacific. Though she would probably pick somewhere in Alaska. Clearly, we’ll have to compromise.

A water bottle, my phone, and my IT lip stain. They are about the only three things I take with me everywhere.

Can you give us a hint as to what you’re working on?

Absolutely. I’m working on the third book in The Perfect Gentlemen series (with Lexi Blake) and gearing up to write the next novel in my Wicked Lovers series, which should be out July 2016.