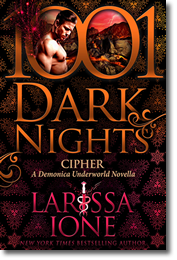 It’s been seven months since Cipher, an Unfallen angel who straddled a razor thin line between good and evil, woke up in hell with a new set of wings, a wicked pair of fangs, and a handler who’s as beautiful as she is dangerous. As a laid-back cyber-specialist who once assisted guardian angels, he’d been in a prime position to earn back his halo. But now, as a True Fallen forced to use his talents for malevolence, he must fight not only his captors and his sexy handler, but the growing corruption inside him…before the friends searching for him become his enemies and he becomes his own worst nightmare.

Lyre is a fallen angel with a heart full of hate. When she’s assigned to ensure that Cipher carries out their boss’s orders, she sees an opportunity to take revenge on those who wronged her. All she has to do is appeal to Cipher’s burgeoning dark side. But the devastatingly handsome fellow True Fallen has other ideas — sexy ideas that threaten to derail all Lyre’s plans and put them in the path of an approaching hell storm.

Danger and desire explode, even as Cipher and Lyre unravel a sinister plot that will fracture the underworld and send shockwaves into Heaven itself…

OMG I loved this story and Cipher and Lyre SO MUCH! How did you choose them for this novella?

Cipher has been in my head for a couple of years now, and it was time for him. Especially since the poor guy got abducted in Her Guardian Angel and he needed to be rescued! Lyre was newer, but I had her name picked out long before the character was born. As a fallen angel who chose the wrong team for all the wrong reasons, she was perfect for him, a fallen angel who was forced onto the wrong team…and who still wanted to do the right thing.

You have so many great characters with so many great names, like the two in this story. How do you come up with the names as the series progresses?

I keep a list of names I think would work for my world, and every time I see one, I add it. I have a pretty good-sized list going right now…with some crazy names! I love using unique names!

If you could have dinner with one of your characters, who would it be and why?

I’d really like to sit down with Azagoth’s mate, Lilliana. Of all my characters, I think she has to be the most balanced. She’s got to maintain her goodness while being in love with perhaps the darkest of all my heroes. As the Grim Reaper, he does a lot of distasteful things and can take out his evil and play with it like a toy at a whim…and she has to be able to let him do what he needs to do while still loving him.

If you could give Cipher and Lyre a theme song, what would it be?

Angel With a Shotgun, by The Cab. It’s perfect!

I’m working on REAPER, the final book in the Demonica Underworld series with 1001 Dark Nights. It’s going to be absolutely explosive and will set the stage for the new Demonica series I hope will hit shelves next year. I can’t wait! 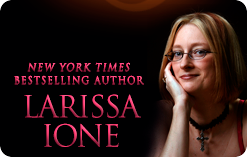