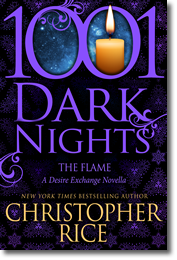 It only takes a moment…

Cassidy Burke has the best of both worlds, a driven and successful husband and a wild, impulsive best friend. But after a decadent Mardi Gras party, Cassidy finds both men pulling away from her. Did the three of them awaken secret desires during a split-second of alcohol-fueled passion? Or is Mardi Gras a time when rules are meant to be broken without consequence?

Only one thing is for certain—the chill that’s descended over her marriage, and her most important friendship, will soon turn into a deep freeze if she doesn’t do something. And soon.

Light this flame at the scene of your greatest passion and all your desires will be yours.

The invitation stares out at her from the window of a French Quarter boutique. The store’s owner claims to have no knowledge of the strange candle. But Cassidy can’t resist its intoxicating scent or the challenge written across its label in elegant cursive. With the strike of a match and one tiny flame, she will call forth a supernatural being with the ultimate power—the power to unchain the heart, the power to remove the fear that stands between a person and their truest desires.

When I was staying at my mother’s house over the holidays last year, someone placed an old scented candle in my bedroom. It was small and mostly used up, but the fragrance hit me as soon as I walked through my bedroom door. I couldn’t believe it at first. I was actually getting turned on. By a smell! From a candle! Fragrances don’t typically arouse me sexually, but for some reason this one did. That experience planted the initial seed of the idea. But I had another inspiration flash, if you will, while I was visiting New York City. I was walking by a hotel where I’d stayed on a previous trip and experienced, let’s just say, a pretty intimate and passionate evening with someone. But when all was said and done, it turned out to be just an evening. (I don’t do long distance well.) So the memory brought with it all of this painful nostalgia and longing, and I thought, “What if there’s a way to go back to that hotel room and draw some spiritual essence of that experience out of the air itself?” What better tool for such a strange ritual than a candle? From there, my mind started racing. I actually bought a small notebook at a bookstore nearby and found the first Starbucks so I could start scribbling down some notes.

If you had to choose a dream cast for the characters, who would play Cassidy, Andrew, and Shane?

Dream casting is always hard because I was always want to play at least one of the characters in my books. And in some sense, I like for my readers to be able to imagine how the characters look. I find readers will do this anyway no matter how exhaustively you describe your characters. I know I do. But if I had to cast Shane from the world outside of my head, I think Ian Somerhalder would be a great choice. Jack Falahee who plays Connor on HOW TO GET AWAY WITH MURDER would also do just fine as Shane. As for Andrew, Stephen Amell, hands down. Forever. In anything. Anywhere. As for Cassidy, I’m going to let the ladies decide on that one. Just remember. She’s supposed to be very petite. Like 5’2”.

It was so much fun. Really. It was so refreshing and different. Much of what I’ve written in the past is dark; there’s usually some form of happy ending but it’s after some real toil and struggle. But with THE FLAME, for the first time I was writing in a universe in which everyone is safe, in which things are going to work out, it was literally soothing to my soul. There are stakes, for sure, and I hope there’s plenty of suspense. But erotic romance is a genre in which we’re rewarded for making ourselves vulnerable, in which our sexuality is exalted and embraced. And I love both of those ideas. I had no idea ménage even existed as a popular genre. When it’s done well, it’s complex and rich and sexy as hell.

Besides writing, you have a successful Internet radio show, The Dinner Party Show. How do you juggle new show ideas and your writing?

I’m the busiest I’ve ever been! I’m not sure when my weekends actually are anymore. We do a live show on Sunday evening at 8 PM ET/ 5 PM PT at TheDinerPartyShow.com and that show typically includes pre-produced sketch comedy we write on Monday and record on Tuesday. But that still leaves plenty of time for books and other projects. I’m incredibly impressed by the output of most of my romance writer friends. It’s inspired me to quit worrying about what I’m going to write and start writing it instead. Nothing’s being carved in stone and it can always be revised and edited later.

You were once named one of People Magazine’s Sexiest Men Alive. Who did you share a page next to? Do you still have a copy?

Ha! You know, I don’t know if I do still have a copy. Isn’t that a shame? I was included in the “Sexiest Sons” insert and the guys on either side of me were Faye Dunaway’s son and Deepak Chopra’s son.

When was the last time YOU were star-struck?

We’ve had a lot of guests on The Dinner Party Show that have left me star struck, probably because most of them have also been wonderful to have in studio. But Patricia Cornwell, hands down. She was just lovely and when she started to say nice things about my thriller, THE HEAVENS RISE, on the air, I started blushing and sputtering like a schoolboy.

What has been one of the most rewarding parts about your writing?

You create these worlds you can re-visit any time you want. It’s why I like to listen to various film scores while I write. Any association to the original movie gets lost and they become my own personal soundtrack. When I listen to them again years later, I can go back to various scenes in old books and feel like I’m with my old characters. It doesn’t matter whether those books sold well or not, those places still exist for me. Also, there’s the very real joy all genre writers experience in writing the world as they would like it to be.

Do you have any writing quirks or rituals you must do?

Thanks to laptop computers, I’ve been allowed to leave a desk. I can float all over the house, sitting in different chairs. But in terms of plotting and outlining, I’m obsessed with notepads and pens. At that early stage of the process, my mind needs to move a bit slower than it does on the keyboard. I often eat alone in restaurants and coffee houses with a notepad and a pen, and sometimes I think I’m staring off into space and I realize I’m glaring at the server and they think they’ve messed up my order.

At this point, I’m not sure if it will be another ménage. I think it depends on how readers respond to THE FLAME. It will definitely be set in the world of The Desire Exchange. THE SURRENDER GATE will release early next year, as a Blue Box Special from 1,001 Dark Nights, and given that it’s also a Desire Exchange Book, it will introduce plenty of new plotlines and characters which could get their own novella in 2015. Stay tuned!