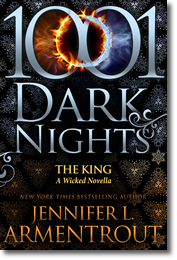 From #1 New York Times and USA Today bestselling author Jennifer L. Armentrout comes the next installment in her Wicked series.

As Caden and Brighton’s attraction grows despite the odds stacked against a happily ever after, they must work together to stop an Ancient fae from releasing the Queen, who wants nothing more than to see Caden become the evil Prince once feared by fae and mortals alike.

I love Cade and Bri’s continued story! How did you decide to make this into a trilogy?

When I originally started writing The Prince, I knew that it would be three books. Sort of like three acts, each one moving toward the ultimate endgame. There was just too much going on for their entire story to be squeezed into two short novellas.

If you could pick a theme song to represent Cade and Bri’s relationship, what would it be?

Oh man, that is such a hard question. For some reason, and I don’t know why, the song Mr. Brightside comes to mind. Let’s go with that.

Sometimes I look at social media and the names of people who interact with me. But for main characters, it’s usually thinking of a name until it feels right. I always like to have a name that can be shortened, like Brighton to Bri.

And speaking of names, you recently adopted a few new pets and they all have some great names, too. Can you tell us about them and how you chose their names?

Haha. Yes, we do have some new animal pals around. We have a new puppy who is a Border Jack ( a cross between a Border Collie and Jack Russell and, if you ask me, a honey badger). His name is Apollo, because I felt it was fitting and if anyone has read my Covenant Series, they’ll understand why. We also have 2 goats named Bambi and Thumper (after Roth’s familiars he named after Disney characters) and two sheep that are siblings that I named Dee and Dawson, which are 2 siblings in my Lux Series.

I’m currently working on the 3rd book in the Origin Series. That’s Evie and Luc, and it’s an explosive one!