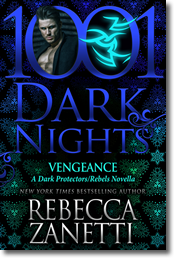 Vengeance and revenge are the only forces driving vampire soldier Noah Siosal since losing his brother to an enemy he’s been unable to find.  He’s searched every corner of the globe, going through adversaries and piling up bodies until finally getting a lead.  The last place he wants to be is in a ridiculous anger management group with people expressing feelings instead of taking action.  Until one fragile human, a green-eyed sweetheart being stalked by danger, catches his eye.  One touch, and he realizes vengeance can’t be anywhere near her.

Anger and self-preservation are the only motivations Abby Miller needs or wants right now.  Falsely accused of attacking the man who’s terrorized her for years, she’s forced as a plea bargain to attend an anger management counseling group with people with some serious rage issues, while learning true self defense on the side.  Yet a man, one more primal than any she’s ever met, draws her in a way and into a world deadlier than she’s ever imagined.  He offers her protection, but she finds the fight is really for his heart, and she’s ready to battle.

OMG I loved Abby and Noah so, so, so, much! How did you choose them for this novella?

I’m so glad you liked them! I thought they were tons of fun, too. For Noah, I thought a guy on a mission who gets sidetracked by having to attend this human anger management group would be kind of funny, and then he meets Abby and she’s in trouble and needs help, so he gets torn in different directions. Abby was interesting to me because she’s discovering herself again after a head injury and bad marriage, so she gets her feet under her just in time to deal with a grumpy vampire.

I also loved the layer of humor between these rough and tumble bad ass warriors. Was it hard writing that side to them?

No, it was tons of fun to write that side of them. They live in such a different reality than most of us where they’re immortal but danger is always hunting them. Toss them into the right situation, and it just has to be funny. Especially since a couple of them are, well, nuts.

If you could dream cast Abby and Noah, who would you choose?

Oh, great question! I think Dina Dobrev would be an awesome Abby. Have you seen her in her new sitcom, Fam? It’s hilarious! And for Noah, definitely Charlie Hunnam all scuffed up and with a sword or two around.

I find it so awesome that you write in both the paranormal romance and romantic suspense genres. What’s it like to have to switch gears while writing in both?

Thanks! I like switching gears because it keeps the writing fresh for me. My paranormals have a good dose of suspense in them, so it isn’t like completely changing genres. What really helps is keeping different music sound tracks for each book, so I can get into that world quickly when I turn on the music to write.

If you choose a theme song to play when a reader opened the front cover of VENGEANCE, what would it be?

I wrote a good portion of VENGEANCE while snowed in on Victoria island, and I listened to Someday by One less Reason about a zillion times on repeat while writing. It has a good beat to it.

Right now I’m finishing up edits for Fallen, which is the next Deep Ops romantic suspense book (after Hidden) that comes out in September. It’s about a couple going undercover with the Irish mob who have different motivations, and the attraction between them explodes. I’m also writing Hero’s Haven, which is the next Dark Protector book, and it releases in January. It finally features wounded Quade Kayrs, who’s been in a hell dimension for centuries and now returns to earth…and things have really changed. LOL! It’s a good thing he finds his mate, Haven, who is both incredibly strong and fragile from her past. I think they make a good match and sizzle up the pages nicely.