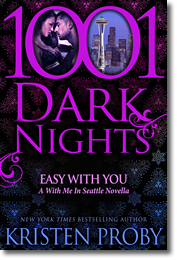 Nothing has ever come easy for Lila Bailey. She’s fought for every good thing in her life during every day of her thirty-one years. Aside from that one night with an impossible to deny stranger a year ago, Lila is the epitome of responsible.

She’s pulled herself out of the train wreck of her childhood, proud to be a professor at Tulane University and laying down roots in a city she’s grown to love. But when some of her female students are viciously murdered, Lila’s shaken to the core and unsure of whom she can trust in New Orleans. When the police detective assigned to the murder case comes to investigate, she’s even more surprised to find herself staring into the eyes of the man that made her toes curl last year.

In an attempt to move on from the tragic loss of his wife, Asher Smith moved his daughter and himself to a new city, ready for a fresh start. A damn fine police lieutenant, but new to the New Orleans force, Asher has a lot to prove to his colleagues and himself.

With a murderer terrorizing the Tulane University campus, Asher finds himself toe-to-toe with the one woman that haunts his dreams. His hands, his lips, his body know her as intimately as he’s ever known anyone. As he learns her mind and heart as well, Asher wants nothing more than to keep her safe, in his bed, and in his and his daughter’s lives for the long haul.

But when Lila becomes the target, can Asher save her in time, or will he lose another woman he loves?

An Exclusive Interview With Kristin Proby:

I absolutely loved Easy With You. The chemistry and connection between Lila and Asher is delicious. How did you choose them for this novella?

Well, I knew going into this project that I wanted to write a cross-over story between the two series. I’d bounced around ideas as to which of the Seattle characters should get a story, and Asher seemed like an obvious choice. He has been a reader favorite since Tied With Me released early last year. Plus, I love writing about tough cops, and Asher didn’t disappoint!

There is an added element of suspense to this story and I loved every thrilling minute. Will we be seeing more suspense from you in the future?

Thank you! I hope so, yes. This was my first venture into romantic suspense, and I admit, I fell in love with it. I’m hoping to write more of it in the near future.

Who would be your dream cast for Asher and Lila?

It’s always so hard to choose the dream cast. I guess, for Asher, I’d choose Ian Sommerhalder and for Lila, Vanessa Hudgens.

The beautiful cover for your novel, Easy Love, was a photo that you took. Is photography a hobby of yours? Will we be seeing more of your work on future covers?

Yes to both questions! I love photography, and have dabbled in it for years. I’ll be traveling to New Orleans to take the photos for the next cover, Easy Charm, in a few weeks.

Recently on Facebook, you mentioned a character who is dying for his story to be written right now (even though his book is later in the series). What do you do in that situation?

I tell him to stop being so damn bossy and get in line! I used to have the luxury of writing the characters that were speaking to me, but my writing schedule is so tight now, there’s no way I can do that. So, I make a lot of notes and hope that I remember what they mean when it comes time to write his story.

Do you have any quirks that come out when you’re getting ready to write? Favorite snack you munch on or a must have music playing in the background?

Absolutely. I must snack on Swedish Fish and Pandora must be turned to the P!nk station.

What has been one of your most memorable moments since becoming an author?

There have been some great moments. I think the biggest so far was signing books with Nora Roberts.

Ok, you’re a self admitted handbag junkie…what is your all time favorite bag and what is a bag you are looking forward to treating yourself with?

I do love me a gorgeous handbag! Let’s see… I recently purchased a gorgeous lambskin Louis Vuitton bag that is to die for. I’m not sure what’s to come, but I’m sure I won’t have a problem finding something lovely.

If you had to choose a kid’s cereal to represent you, which one would it be and why?

Trix… because I’m a kid at heart, and I might have a trick or two up my sleeve. 😉

New York Times and USA Today Bestselling author Kristen Proby is the author of the bestselling With Me In Seattle and Love Under the Big Sky series. She has a passion for a good love story and strong, humorous characters with a strong sense of loyalty and family. Her men are the alpha type; fiercely protective and a bit bossy, and her ladies are fun, strong, and not afraid to stand up for themselves.

Kristen lives in Montana, where she enjoys coffee, chocolate and sunshine. And naps.