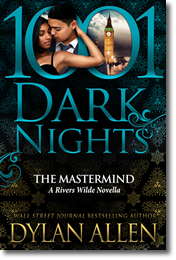 He lives under a golden spotlight.
I’m shackled to a past that must stay hidden.

Omar Solomon is the king of the comeback.
Ten years ago his career as a star athlete ended in injury and scandal.
He may have traded in his cleats for Gucci loafers, but he’s been as victorious in the boardroom as he was on the pitch.

He returns to London, wealthy, influential, and powerful beyond measure.
And he spends every weekend in the pub where I work.
A law student with a night job and a dark past,
I’m hardly the type of woman a man like him would notice.

Or so I thought.

When he offers me a no-strings-attached affair,
I forget all the reasons I should say no.
He’s straight out of my dreams—
with a body and a mouth made for sinning.

Our passion turns my gray existence into a vibrant, colorful life.
But it has an expiration date.

When his time in London is over, we will be, too.
And it will be for the best.
Because he can never find out who I really am.

But my Mastermind has set his sights on a new goal: me.
And this time he’s playing for keeps.

An Exclusive Interview With Dylan Allen:

Omar was a secondary character in one of my earliest books, Thicker Than Water and immediately captured the imagination of people who read that book. I understood why – his tell it like it is, rough edged demeanor showed glimmers of humor and heart. But, the man with everything was very hard to pair up. It took me nearly four years to dream up a heroine who could not only keep up with him, but force him to question all of his assumptions. Jules is strong and big hearted and after the heartache and disappointment her early life dealt her, I knew Rivers Wilde was just the place to heal her. This story kicks off the start of a whole new galaxy in Rivers Wilde and I’m so excited for people to meet them both.

Absolutely without a doubt, it would be Adjoa Andoh – who played Lady Danbury in the Netflix blockbuster, Bridgerton. Not only is she Ghanaian like I am, we were both born on Monday (hence the name Adjoa) and her voice is divine.

Write the story that scares you and lean into the things that make your voice unique.

He may have fooled everyone else into thinking he was as perfectly ordered on the inside as he was on the outside. But Rafael was nobody’s fool. Even when she was barely eighteen and greener than fresh cut grass – she could smell the mayhem on Leo Valentine’s from across the crystal lit dance floor that separated them.

For Omar, I’d choose Michael Evans Behling and for Jules Jasmine Tookes – they were both my inspiration while writing the story!

Not to get them because they never go away!

Vampires – I am obsessed with them!

Their first date! They walk down the gorgeous iconic Millback the scenery would be as riveting as the two people who are just starting to fall in love.

I go off on tangents in the middle of conversations and forget what I was talking about initially. Even worse, the person listening has forgotten, too.

Omar made that easy! The Mastermind was his nickname when he was a professional athlete.

Wall Street Journal and USA Today Bestselling Author, Dylan Allen is a Texas girl with a serious case of wanderlust.

A self-proclaimed happily ever junkie, she loves creating stories where her characters find a love worth fighting for. When she isn’t writing or reading, eating, or cooking, Dylan enjoys planning her next globe-trotting adventure.

A reformed lawyer, Dylan lives in Texas with her amazing husband and two sons.