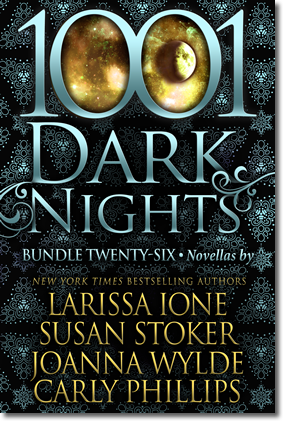 It’s been seven months since Cipher, an Unfallen angel who straddled a razor thin line between good and evil, woke up in hell with a new set of wings, a wicked pair of fangs, and a handler who’s as beautiful as she is dangerous. Lyre is a fallen angel with a heart full of hate. When she’s assigned to ensure that Cipher carries out their boss’s orders, she sees an opportunity to take revenge on those who wronged her. All she has to do is appeal to Cipher’s burgeoning dark side. But Cipher has other ideas…

After years of estrangement, Mercedes Laughlin has finally reconciled with her older brother. It should be the happiest time of her life, getting to know Truck and his new wife…and it would be, if an ex wasn’t causing her trouble. Add in Truck’s boss, Colonel Colton Robinson, an amazingly distracting man whom she met under embarrassing circumstances, and Macie’s got a bit more on her plate than she can handle.

Colt isn’t about to let his friend lose his sister again so soon…or miss his own chance at a happy ending with Macie before they’ve barely had a beginning.

Peaches Taylor spent the last seven years slinging drinks and dodging drunks at the Starkwood Saloon. Some might call it a dead end job, but to her it was an investment—another six months, and she’d have enough money to buy the place. Life would’ve been perfect if Eli hadn’t come home.

Eli King is ready to settle down. He stood by his brothers when they needed him, paying the price for their freedom with his own. Now it’s time to claim his reward—the Starkwood Saloon. He’s got the cash to buy the bar, the skills to run it, and just one person standing between him and his dream: Peaches Taylor.

Take the Bride by Carly Phillips

Ryder Hammond and Sierra Knight were high school sweethearts. Despite him being her brother’s best friend, their relationship burned hot and fast…and ended with heartbreak and regrets.

Years later, she’s at the altar, about to marry another man.

He’s only there for closure, to finally put the past behind him.

But when the preacher asks if anyone has a reason the couple shouldn’t wed, she turns around and her gaze locks on his.

Suddenly he’s out of his seat.

And ultimately stealing the very pissed off bride and taking her to a secluded cabin.