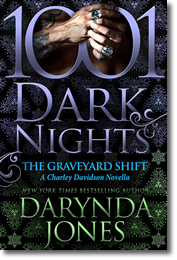 Guarding a precocious five-year-old who is half-human, half-god, and 100% destined to save the world is no easy feat.

Garrett Swopes was the ultimate skeptic until he met a certain hellion and her husband. They vanished after stopping a catastrophic event and left him, a mere mortal, in charge of protecting their gift to mankind. But when she disappears as well, he needs the help of another breed of hellion. One who can see past the veil of space and time. One who betrayed him.

She will get a truce in the deal, but she will never earn his forgiveness.

Marika Dubois’s son—a warrior in the coming war between heaven and hell—was foreseen long before his birth. But to create a child strong enough to endure the trials that lay ahead, she needed a descendant of powerful magics. She found that in Garrett Swopes and tricked him into fathering her son. A ploy he has never forgiven her for. But when he knocks on her door asking for her help, she sees the fierce attraction he tries to deny rise within him.

And Marika has to decide if she dares risk her heart a second time to help the only man she’s ever loved.

An Exclusive Interview With Darynda Jones:

OMG I loved Garrett and Marika! How did you choose them for this novella?

Thank you! I felt like Garrett was due some happiness. LOL. This guy has clocked tons of field time in Charley’s world, has done so much for her and her family, including risking his life countless times (and even dying once!), and I felt he deserved an HEA. I also wanted to give him a little something extra. He was always destined to be on Beep’s team. I wanted him to have an edge over the competition, so to speak. Now, he may have one. *wink, wink*

Speaking of loving this story…I was so excited to go back into the Charley Davidson series! Was it as fun to write in the world as it is for fans to read it?

OMG it was SO good to be back in that world. I hope Charley fans will love reading it as much as I loved writing it. I have been dying to know more about Marika and her heritage and to see what Garrett’s been up to. Not to mention a certain hellion affectionately referred to as Beep. I was over the moon when writing this story.

If you could choose a theme song for Garrett and Marika, what would it be?

Right now, I’m finishing up the second in the Sunshine Vicram series, A Good Day for Chardonnay. Next it’s on to Bewitched: Betwixt and Between Book 2, and then I plan on outlining my second novella for 1001 Dark Night coming in May 2021, The Gravedigger’s Son. That one jumps another few years in the Charley world and is Quentin and Amber’s story, and I cannot wait to write it! 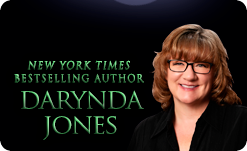