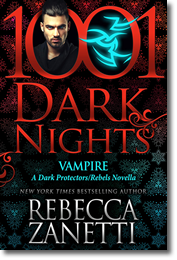 Dr. Mariana Lopez has finally stopped bailing friends out of difficult situations. Well, except for substituting as the leader for another anger management group, pitching in as a campaign strategist for a prospective sheriff, and babysitting three dogs. Even with such a full life, she can feel the danger around her—a sense that something isn’t right. Nightmares harass her, until the real thing comes to life, and only the dark and sexy male sitting in her group can save her. However, with safety comes a price she might not be willing to pay.

Raine Maxwell is one of the Maxwells out of Montana, which means he’s not only one of the most deadly vampires alive, but his path is set and his mate has been chosen for him. To save him—to continue his line. Unfortunately, his mate is an enhanced human female who has no idea of her abilities, of his species, or of her future. He’d like to lead her gently into this new world, but his people aren’t the only ones who’ve found her, which puts her into more danger than she can imagine. Plus, in order to follow his laws, he only has one week to convince her that immortality with him is what she wants—and needs.

OMG I loved Mariana and Raine! How did you choose them for this novella?

Thank you so much! They’ve been a slow burn couple during the Rebels novellas, and it was their turn. They were having a rough time staying away from each other, and finally, they just couldn’t fight it any longer. Of course, a kidnapping might’ve helped things along…

When you started writing the Dark Protectors series, did you have an idea of how many books you wanted to write in the series? Jill, I had no idea how many books we’d end up having in this series! I’m still surprised, and I’m so grateful I get to keep writing these wild immortals.

You have a super cool symbol for the Dark Protectors series and the mating mark. Have any readers gotten it as a real tattoo? Have, or would, you?

I have seen readers with the tattoo! It’s so cool!

Now, I *think* I already know the answer to this, but who was the most interesting person you’ve ever had tea with and can you tell us a little about the experience?

It’s you, Jill! In fact, it’s the entire 1001 DN group in Paris last time we were all there for RARE. Remember? The tea was lovely.

Can you give us a line from your current work in progress?

Sure! Here’s a line from REBEL’s KARMA, the next Dark Protector book, which is Benny’s book that releases in June:

“Keep it a secret about the dragons. I’m sure I’m not supposed to tell anybody.” Then Benny turned to her. “So. Wanna make out?”