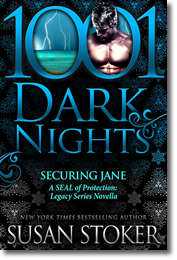 Over the years, Storm North has witnessed two teams of Navy SEALs under his command find true love. He doesn’t expect the same for himself. He’s too old. Too jaded. Too set in his ways. Until a woman who’s been right in front of him for years manages to impress Storm in a way very few women—or men—ever have.

Jane Hamilton knows it’s ridiculous to have a crush on the charismatic and handsome admiral. She’s the divorced mother of a twenty-six-year-old daughter. Too old for crushes. Too old for a lot of things. There’s no chance she’ll ever catch the eye of a man like Storm North.

Until someone delivers a bomb to the base.

As the civilian contractor in charge of the mail room, Jane finds herself in the direct line of fire, enduring a series of events that leads to a budding relationship with the very man she’s been longing for. She couldn’t be happier, and Storm feels the same.

The only one unhappy, in fact, is the thwarted bomber. Unhappy enough to do something drastic. Now Storm and Jane have to work together to save innocent sailors—and themselves—from an explosive situation threatening their happily ever after.

An Exclusive Interview With Susan Stoker:

I absolutely LOVED Jane and Storm! How did you choose them for this novella?

I love writing about older characters…there’s just less “drama” with them I think. And Commander North has been in quite a few books and I really wanted him to get his happily ever after (and Jane was a perfect match for him!).

I also LOVED Storm’s name. You have some other great ones like Milena, Everly, and Zara. How do you come up with your character names?

Sometimes I steal names from people I’ve known in real life (Koren, Blythe, Jodelle), other times I use a baby name website. I also find names by looking through my reader group on social media (that’s where Allye and Jessyka came from).

It’s so cool and interesting that you’ve lived in so many states. Are there any places you’d love to move to that you haven’t yet?

Hawaii! And Alaska! I’ve visited both states many times and they’re so unique in their own ways.

If someone narrated your life, who would you want the narrator to be?

Morgan Freeman? He’s got such a great voice. (Although I’m not sure my life in narration would be all that interesting! Lol)

Can you give us a line from the book you’re currently working on?

This is how Kenna meets her man (This is the third book in the SEAL Team Hawaii book, Finding Kenna).

“I was running up there,” she said, indicating the path next to the lagoon. “Minding my own business, and I saw you. You were face down. Floating.”

The man’s lips twitched, and Kenna spoke faster, just wanting this over with. “I thought you were drowning, okay?”

“So you jumped in to save me?”

“Yeah,” Kenna said sheepishly. “But you obviously aren’t drowning, and I’m an idiot. So I’ll just be going now.” She looked over at the rocks meaningfully.

“We’re SEALs,” one of the other men said, obviously trying hard not to burst out laughing.

Aaaaand. Now her humiliation was complete.

New York Times, USA Today, #1 Amazon Bestseller, and Wall Street Journal Bestselling Author, Susan Stoker has a heart as big as the state of Tennessee where she lives, but this all American girl has also spent the last eighteen years living in Missouri, California, Colorado, Indiana, and Texas. She’s married to a retired Army man (and current firefighter/EMT) who now gets to follow her around the country.

She debuted her first series in 2014 and quickly followed that up with the SEAL of Protection Series, which solidified her love of writing and creating stories readers can get lost in.