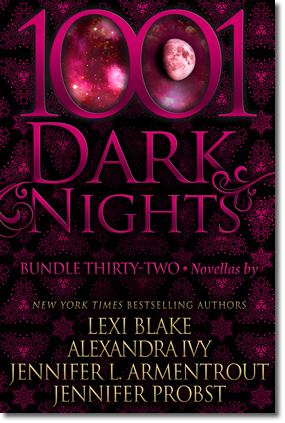 JT Malone is lucky, and he knows it. He is the heir to a billion-dollar petroleum empire, and he has a loving family. Between his good looks and his charm, he can have almost any woman he wants. So why does it all feel so empty?
Nina Blunt is pretty sure she’s cursed. She worked her way up through the ranks at Interpol, fighting for every step with hard work and discipline. Then she lost it all because she loved the wrong person. Rebuilding her career with McKay-Taggart, she can’t help but feel lonely.

When JT comes to McKay-Taggart for assistance rooting out a corporate spy, Nina signs on to the job. But their working relationship becomes tricky as their personal chemistry flares like a wildfire.

Sacrifice of Darkness by Alexandra Ivy

As the manager of the Viper’s Nest in Vegas, Javad has one rule. No fighting pits. Period. When he hears rumors that some fool has dared to create a fighting pit in the middle of the desert, he goes in search of the hidden location. He realizes too late it’s a trap by his former master Vynom.

Terra had been captured by Vynom long ago and forced to heal the fighters he used in his pits. Javad had rescued her, and she’d given him a medallion. If he ever needed her, all he had to do was to speak her name and the magic would lead her to him. When she hears his call she doesn’t hesitate to rush to his rescue. Even when it means returning to the dark violence that still haunts her dreams.

The Queen by Jennifer L. Armentrout

The King must have his Queen….

Bestowed the forbidden Summer’s Kiss by the King of the Summer fae, Brighton Jussier is no longer just human. What she is, what she will become, no one knows for sure, but that isn’t her biggest concern at the moment. Now Caden, the King, refuses to let her go, even at the cost of his Court. When the doorway to the Otherworld is breached, both Brighton and Caden must do the unthinkable—not just to survive themselves, but also to save mankind from the evil that threatens the world.

As the daughter of the Governor, Chloe Lake is consistently in the spotlight. Both her career and personal life have exploded. Fortunately, her work as an advocate for animal welfare requires constant publicity and funding, so she embraces her role and plays for the camera.

Owen Salt fell hard for Chloe when he was a screwed-up kid in college and spent the next years changing himself. When work brings him back to fight for justice by her side, he swears he can handle it. But he’s never really gotten over his first love—and he wants one more opportunity to prove he’s a man who’s worthy.