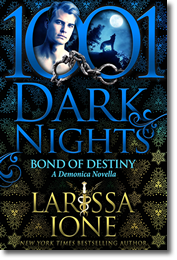 Sold into slavery mere hours after his birth to werewolf parents, Tracker spent decades in service to cruel underworlders. Then the fallen angel Harvester transferred his ownership to a human woman who gave him as much freedom as the unbreakable bond would allow. Still, thanks to his traumatic past, he’s afraid to trust, let alone feel love. But when an acquaintance shows up at his door, injured and in need of help, he finds himself longing for a connection. For someone to touch. For someone to care.

Stacey Markham has had it bad for Tracker since the day her best friend, Jillian, was forced to hold his unbreakable slave bond. At first, the fact that he’s a werewolf seemed weird to Stacey, but hey, her best friend was married to one of the Four Horsemen of the Apocalypse, so weird is definitely a matter of perspective. Stacey knows the depths of Tracker’s trauma, and she longs to help him even as he helps her, but breaking through his walls isn’t easy.

And it only gets harder when the only blood family he has, the pack that gave him away, lays claim to him…and everything he loves.

OMG I loved Stacey and Tracker so, so, so, much. How did you choose them for this novella?

Yay! So happy you loved them! I chose them because A) Tracker has been at the top of my “must have an HEA” list since the day the poor guy appeared in Eternal Rider, and B) Stacey was so fun in Rogue Rider that I knew she needed a story. Plus, I really wanted to write a story with a good friend connection. The older I get, the more I treasure my friends, and as an author I’m really starting to gravitate toward more female bonding books.

The Demonica world has really evolved over the years and has so many moving parts/characters/realms. How do you keep track of it all?

Um, yeah…so…that’s the question of the century. Right now I’m re-reading all of my books and taking lots of notes as I work on the next generation of books. It’s a HUGE and complex world, so it’s taking longer than I expected. I’m currently cursing my love for detail!

I got super excited when I noticed something called “Demonica Birthright” on your website in the coming soon section. Can you tell us anything about that?

Yes! It’ll be set about 30 years in the future, and it’ll feature the kids of the Demonica/Lords of Deliverance world…all grown up. I’m SUPER excited about this series and where it’s going to lead.

You’re a huge Star Trek fan and I’m dying to know…if you could write a fanfic story based on one Star Trek character, who would it be and why?

Just one??? Yikes. Hmm…probably Spock. He was pretty much my first crush. That stoic, logical Vulcan intrigued me and made me want to be the one to break through that calm wall. My favorite episodes are the ones in which he shows emotion. So hot. The romance author in me wants to hook him up and do the Pon Farr thing…

You have a totally awesome gnome collection on your property! Are there any gnomes you’re dying to add to your collection? Oh! Do you have any vampire gnomes?

I do not have any vampire gnomes! But now I need to research if they exist. Because if they do, then that is the answer to your first question. I’m dying to add them!

Can you give us a line from what you’re currently working on?

There was blood on the ice, and some teeth were going to join the blood if that blond, scruffy-bearded asshole came at Sabre again. – Reign of Pleasure (1st Demonica Birthright book) 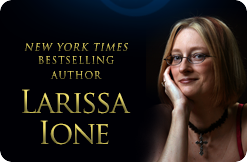