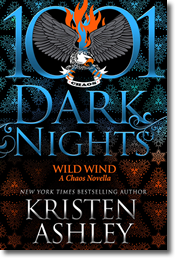 When he was sixteen years old, Jagger Black laid eyes on the girl who was his. At a cemetery. During her mother’s funeral.

For years, their lives cross, they feel the pull of their connection, but then they go their separate ways.

But when Jagger sees that girl chasing someone down the street, he doesn’t think twice before he wades right in. And when he gets a full-on dose of the woman she’s become, he knows he finally has to decide if he’s all in or if it’s time to cut her loose.

She’s ready to be cut loose.

But Jagger is all in.

OMG I loved Archie and Jagger *all the heart eyes*. How did you choose them for this novella?

Honestly, Jagger’s girl hid from me until the last minute. Then, I watched Zoe Kravitz in “High Fidelity.” That is a book I loved, by an author I love (Nick Hornby), and a movie (with John Cusack) that I loved, but the modern twist of Zoe playing Rob was spectacular.

And I thought…tweak this (primarily, make Jagger’s girl a little less messed up than Rob, HA!) and this hits so many marks.

First, we need a “new” Fortnum’s for the young crowd. And I love and adore vintage shops and geeky record stores that sell albums (obviously) and kitschy, hilarious stuff. I could dink through both for hours. And the owners/buyers have to be cool as shit or they wouldn’t be able to find all that awesome stuff.

So, second, that resonated for Jagger. He is not going to have his head turned by just beauty. He’s 100% going to need flat-out cool.

Archie fits that bill. She’s that girl who’s hip and up on all the trends and has a hunger for life at the same time is very mellow and Zen and is just straight-up cool. Perfect for Jag.

And she in turn provides this kickass place for the next generation to hang!

The Black brothers hold such a special place in our hearts and it was such an amazing experience to read both of them get their HEAs. How did it feel to write them?

They wrecked me. I can get into my books and I will get intensely emotional, but my God. The denouement in this book broke me. It is not an exaggeration that I cried for six hours straight when I wrote that (I have photo evidence, I took a picture of myself and sent it to Liz, showing her what Jagger was doing to me, snotty nose, red puffy eyes and all!).

I really don’t remember having that kind of breakdown with a character before.

I think this was because this was the true end of the arc from when Black was first mentioned long, long ago in Motorcycle Man. Finally, to have all of his people happy. All of them in love. All of them taken care of. I think I was waiting for that, I needed it, I needed to give it to them, to Black. And the release of that happening was my undoing.

It was the end of a massive journey for me. For them.

And that meant everything to me.

Can we talk about how awesome the name Archie is for a heroine? How did you come up with it?

I love the name Archie. And I felt there were going to be parallels for Dutch and Jagger. They were their mother’s sons, their father’s sons and Hound’s sons. So, although they are very different, they are also quite the same. When Dutch’s girl was named Georgie, well…

Has a story ever gone in a direction you never anticipated once you started writing? Which one?

Hmm…I have to say, not really but only because, for the most part, I’ve made no decisions about What’s Going to Happen! when I go into a book. I don’t plot, so it’s an adventure for me from the start. I never know what’s going to happen, so it’s all a surprise for me.

But I do make assumptions or have expectations. And sometimes, those don’t pan out.

For instance, I’m writing Chloe and Judge’s story, the next in my River Rain series, and Judge just revealed who his father was. And I was like, “WHAT!?!?!” That was absolutely not what I was expecting.

My books unravel for me as they do for my readers.

We can just say, I have the greatest job EVER!

If you could own any mythical creature as a pet, what would it be and what would you name it?

My very first thought is a gryphon named Fluffy. We could fly around, and he could freak out drivers that don’t use their turn signals. Or he could fly over me and swoop down in front of folks who pull out in front of me then immediately turn right. He could hang out on the deck with me up at the Rock Chick Shack. We’d have tons of fun together.

I think a dragon would be difficult to keep fed and God knows, I’d love a unicorn. But it’d constantly be like when those friends who send you cards, and you open them, and the glitter goes everywhere. I don’t need to be vacuuming up glitter every day. I get enough of that with Starla leaving fluff balls everywhere.

So gryphon it is!

Can you give us a line from your current work-in-progress?

“We’ve already established I can’t be a dick on command. I can only do it when I’m flirting with you.”