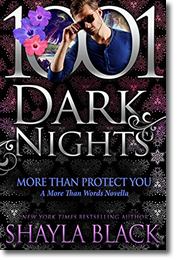 More Than Protect You

(A More Than Words Novella)

Can I keep the gorgeous, gun-shy single mother safe—and prove I’m the man for her?

I’m Tanner Kirk—Certified firearms instructor and mixed martial arts enthusiast. When I filed for divorce at the end of an empty marriage, all I wanted was a vacation in paradise, not another woman in my life. But how can I possibly say no to Amanda Lund, a young single mom desperate to learn self-defense? Or refuse the banked desire on the guarded beauty’s face?

So I seduce Mandy until we’re burning up the sheets…and soon find my heart entangled with her bruised and battered one. But when a nemesis from her past tries to destroy our future by unearthing my secret, will she understand and forgive me—or give up on us forever?

Oh, how I adored Mandy and Tanner! How did you choose them for this story?

I’ve hinted and teased about Amanda from the very beginning, and anyone who reads me knows I love to play with point of view and perception. Early in the More Than Words series, I alluded to her mistakes and their consequences. Some even saw her as a potential villain because she seemed like such a bad girl. But I knew she had a deeper story. I knew only she could describe what led her down that unfortunate path. I knew she had a weakness that would eventually make her very strong after all she faced. And I knew she’d be wary about opening her heart again. So I wanted to pair her with a guy who’s not only alpha and protective, but also kind, fair, and recovering from his own bumps in the road. THAT’S the story I wanted to tell.

If you could dream cast them for a movie, who would you choose?

The funny thing about me on the rare occasions I’m inspired by real actors is that I picture them from certain films or shows. That’s true here.

In my mind, I mentally cast Sophia Myles in the role of Amanda as she appeared in the film Tristan and Isolde (minus the medieval costume). She has that soft, almost ethereal quality I sought, but there’s something about her… The eyes, maybe? She refused to be anyone’s damsel in distress.

My image of Tanner is someone silent and strong—and hot as hell. Someone like male model Steve Boyd.

You have one of the most fun Facebook groups, and always have a blast with your fans. What have been some of your favorite memories from the group?

The Book Beauties are an absolutely delightful, amazing group of readers. They’ve been growing with me for years, and they’re always there for a great laugh when William and I say or do something goofy. But I felt incredibly connected to them this past summer when my daughter had a shocking, unexpected stroke and a resulting trip to the hospital. She’s fine now (thank God!), but the Book Beauties were there with and for me. The messages and support, the cards and get-well gifts they sent to Baby touched my heart. I’m so grateful to all of them.

I’m super excited about Zyron’s duet, starting with Wicked as Lies in February. Zy’s real name is Chase Garrett, but he got the nickname Zyron because he’s a dead ringer for an all-grown-up Zac Efron. As a whole, I love interesting, off-the-beaten-path names, so I will often hunt for them. Sometimes I can make those stick. And sometimes, a character comes to me with a name. Me trying to talk them out of that name, even if I don’t like it, is pointless. After all, it’s their story…

I’m finishing up my latest Forbidden Confession, Seduced by the Bodyguard. I love writing these hot, intense stories of illicit feelings in unconventional places between unexpected lovers. Plus, they’re incredibly binge-worthy, which makes it even more fun for me!