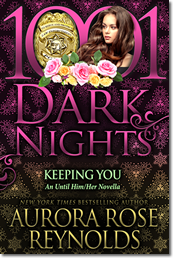 (An Until Him/Her Novella)

Having been put through the ringer by her ex who was a perpetual cheater and master manipulator, Bridgett doesn’t have much faith in men. Then Noah comes into her life, a guy unlike any man she’s ever known. Not only is he dependable, kind, and honest, he’s too hot for his own good.

Not that any of that matters since Bridgett is still technically married, and Noah has made it clear without words that he’s not interested.

So what’s the worst that could happen when there’s a fire and he offers her a place to crash until she can get back on her feet?

Protecting those in need comes with his job as a police officer, so Noah’s not surprised by his need to protect Bridgett. The feelings of possessiveness when it comes to her are not something he knows how to deal with.

Noah knows he should keep her at arm’s length, but instead of putting distance between them he keeps finding ways to bring them closer together and he’s not sure if she will ever be close enough.

Biography:
Aurora Rose Reynolds is a New York Times, USA Today and Wall Street Journal bestselling author whose wildly popular series include Until, Until Him, Until Her, Underground King, Shooting Stars, Fluke My Life and How to Catch an Alpha series.

Her writing career started in an attempt to get the outrageously alpha men who resided in her head to leave her alone and has blossomed into an opportunity to share her stories with readers all over the world.