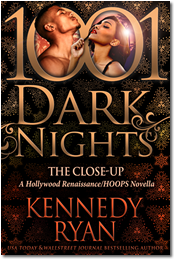 Set in the dynamic worlds of professional basketball and entertainment, two of Kennedy Ryan’s most critically-acclaimed series—HOOPs and Hollywood Renaissance—collide in this tale of forbidden romance.

I shared one magical night under the stars with my brother’s rival, thinking it was the start of a once-in-a-lifetime  something.

But one awful moment ended it all.

Years later when we meet again, we’ve both pursued our dreams, lived a little, found success . . .but never found love. What began as a tiny flame when we were young now threatens to consume us. I’m more drawn to Naz than ever, but his complicated history with my brother makes whatever this could be . . . nearly impossible.

But Naz accepts impossible as a dare.

Through his clever maneuvering and dogged determination, I find myself on a yacht with him and his friends cruising through the Mediterranean.  It’s a whirlwind set ablaze. Away from reality, surrendering to the tender heat of his touch, I forget that everything could burn.

*This is the love story of Takira, who first appears in Reel, book 1 of the Hollywood Renaissance series. Characters from the HOOPS series also make appearances, but you do not have to read any of those books to enjoy this one.

An Exclusive Interview with Kennedy Ryan

I introduced Takira, the heroine, in Reel, book 1 of my Hollywood Renaissance series as the best friend. She was bold and funny and loyal. There was a line or two about her bad experiences with dating, and I really wanted to see her spoiled and adored. Naz is a new character from my most popular series HOOPS. I love basketball. Like obsessed. My husband is a former baller, and they are some of my favorite characters to write. There is something very tender about Takira and Naz’s story, meeting briefly in high school and then reuniting years later. I love a good second chance romance, and this one gave me the chance to do a crossover between my two most critically-acclaimed series. For readers who have read any of the HOOPS novels, they’ll get to catch up with couples from Long Shot, Block Shot and Hook Shot. This steamy story can also be enjoyed completely on its own if you haven’t read those books.

I STOP writing. LOL! That sounds self-evident, but I’m not one of those people who dives directly into the next thing. I take big chunks of time between to recover. My books tend to be research-heavy and kind of consume everything. I need to build in time where I can immerse myself in the “real” world as I come out of the one I’ve created.

Angela Basset maybe? First of all, she’s created some of the fiercest characters we’ve seen onscreen. She often portrays women who are simultaneously powerful, yet vulnerable and very human. I think she’d bring all of that energy to my life story. LOL! And her actual voice is incredible and I could listen to her talk all day.

Be inspired by great writers and great books, but don’t emulate. Take the time to figure out who you are and what you want to say and who you want to be and how you want your voice as a writer to SOUND. Then cultivate that. Stick to that.

Before I Let Go actually is DONE and releases November 15, but I’m eager to share this book with the world, so I’ll share a few lines. It is a book about healing and joy and hoping the love of your life is still there when you find your way back to them. It’s a divorced couple who’s been through a lot, but still love each other deeply. I promise it’s a romantic, steamy slow burn, but the lines I’m sharing speak more to the heroine’s journey back from grief as she negotiates her way back into the light:

Public grief is tricky to negotiate. At a certain point, and it varies depending on the person and circumstance, there comes a time when
you should be “over it.” You should have moved on by now. And you’re so aware of the fact that you are not, that you cannot. You don’t
want others to see your past-due tears or sense the pain that has outstayed its welcome. You protect them from feeling awkward because
you’re still in pain. When the facade fails and you lose it, the stares soaked in sympathy are as bad as the ones filled with contempt. I
know the aftertaste of such meltdowns well; have experienced firsthand the violent vulnerability a broken mind and desecrated spirit can use against you.

I don’t recall there being tough scenes to write in this book. It was one of the easiest writing experiences I’ve had in a long time. My books are usually really emotional, require weeks, months of research and interviews. This book didn’t, and I very deliberately wanted to have a good time and for readers to feel the passion, the lightness of a summer fling that quickly becomes more.

I fall all the time. I’m the classic absent-minded writer and I don’t pay attention to where I’m going. I’m always mentally only half in reality, so I trip a lot. LOL!

Takira is a celebrity make-up artist who is always readying others for their moment in the spotlight. This man is so obsessed with her; so enamored of her, he makes her the center of his world and gives her all of his attention. It’s like she’s always been on the sidelines watching others shine, but NOW it’s time for her close-up; time for her to shine and feel like the center.

A RITA® Award Winner and USA Today Bestseller, Kennedy Ryan writes for women from all walks of life, empowering them and placing them firmly at the center of each story and in charge of their own destinies. Her heroes respect, cherish and lose their minds for the women who capture their hearts.

Kennedy and her writings have been featured in Chicken Soup for the Soul, USA Today, Entertainment Weekly, Glamour to name a few. She has always leveraged her journalism background to write for charity and non-profit organizations, but has a special passion for raising Autism awareness.The co-founder of LIFT 4 Autism, an annual charitable book auction, she has appeared on Headline News, Montel Williams, NPR and other media outlets as a voice for ASD families. She is a wife to her lifetime lover and mother to an extraordinary son.