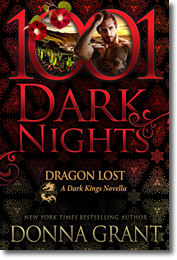 Destinies can’t be ignored. No one knows that better than Annita. For as long as she can remember, it’s been foretold she would find a dragon. A real-life dragon. She’s beginning to think it was all some kind of mistake until she’s swimming in one of the many caves around the island and discovers none other than a dragon. There is no fear as she approaches, utterly transfixed at the sight of the creature. Then he shifts into the shape of a thoroughly gorgeous man who spears her with bright blue eyes. In that instant, she knows her destiny has arrived. And the dragon holds the key to everything.

All Royden wanted was to find an item his brother buried when they were children. It was supposed to be a quick and simple trip, but he should’ve known nothing would be easy with enemies like the Dragon Kings have. Royden has no choice but to trust the beguiling woman who tempts him like no other. And in doing so, they unleash a love so strong, so pure that nothing can hold it back.

Oh, how I loved Annita and Royden! How did you choose them for this story?

I’d slated the location for this book in Crete long ago, because I just knew there had to be a story there. I didn’t know who the Dragon King was going to be until it came time for me to write the story. Then, it was a matter of finding the perfect heroine for him.

Thank you! I love unusual names, but more than that, the name has to connect with the reader. I’ve chosen names before and started writing, only to realize it was the wrong name for that character. So I go searching for names and just keep looking until the character tells me that’s the one for them.

If you could dream cast Annita and Royden, who would you choose?

I’m the worst at this. I don’t base my characters off actors, so it’s always difficult for me to look at anyone and picture them as a certain character, because it’s all created in my head.

If you could choose a theme song to play every time you walked into a room, what would it be?

Back in Black by AC/DC.

My two planners (business and personal), a notebook to jot down notes during my conference calls, my headphones/stand, a Himalayan salt lamp, quartz crystal, smoky quartz crystal, my Lucky Cat, as well as a stack of things I need to take care of.