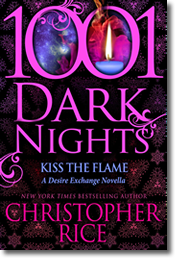 In a standalone novella that combines the worlds of THE FLAME and his novel, THE SURRENDER GATE, New York Times bestselling author Christopher Rice returns you to a mysterious candle shop in the New Orleans French Quarter where the scents of passion provide the courage to embrace your heart’s desire.

Are some risks worth taking?

Laney Foley is the first woman from her hard working family to attend college. That’s why she can’t act on her powerful attraction to one of the gorgeous teaching assistants in her Introduction to Art History course. Getting involved with a man who has control over her final grade is just too risky. But ever since he first laid eyes on her, Michael Brouchard seems to think about little else but the two of them together. And it’s become harder for Laney to ignore his intelligence and his charm.

During a walk through the French Quarter, an intoxicating scent that reminds Laney of her not-so-secret admirer draws her into an elegant scented candle shop. The shop’s charming and mysterious owner seems to have stepped out of another time, and he offers Laney a gift that could break down the walls of her fear in a way that can only be described as magic. But will she accept it?

Lilliane Williams is a radiant, a supernatural being with the power to make your deepest sexual fantasy take shape around you with just a gentle press of her lips to yours. But her gifts came at a price. Decades ago, she set foot inside what she thought was an ordinary scented candle shop in the French Quarter. When she resisted the magical gift offered to her inside, Lilliane was endowed with eternal youth and startling supernatural powers, but the ability to experience and receive romantic love was removed from her forever. When Lilliane meets a young woman who seems poised to make the same mistake she did years before, she becomes determined to stop her, but that will mean revealing her truth to a stranger. Will Lilliane’s story provide Laney with the courage she needs to open her heart to the kind of true love only magic can reveal?

Oh, I just adored this story. I was so sad to have come to the end because Laney and Michael are just so amazing together. How did you choose them for this novella?

They chose me, really. I like characters who aren’t born with all the advantages in the world. That’s who Laney Foley is. She’s worked really hard to get where she is in life, and sometimes people who work hard and make sacrifices come to believe they’re not entitled to messy, risky things like romance. Michael, on the other hand, is my favorite kind of alpha. Assertive, but also smart and charming. He’s ready to take the leap with Laney from the moment he sees her, but Laney has to get over the walls she’s built first. He can’t do that for her, but he can help. That’s for sure. And he’s very, very willing to help.

Who would you choose to cast as Michael and Laney?

Gosh, that’s a tough one. I have certain actors that I’d pick to play anything. Stephen Amell, for instance. Aside from being gorgeous, he’s got a sly, flirty intelligence to that adds to his sex appeal, and it makes him the perfect choice to play a teacher like Michael. I really thought Dakota Johnson did an amazing job in ‘Fifty Shades of Grey’, and in her appearance on Saturday Night Life. She’s an actress with incredible range and she’s going to be a huge star. She’d be a great Laney.

I love your beautiful description of New Orleans and I know you lived there for quite some time. Do you ever see yourself moving back?

It’s a wonderful place to visit, but California is really home now. I’ve lived in Southern California for fifteen years, almost longer than I lived in New Orleans. But New Orleans never leaves your blood. I love conjuring it through fiction.

There were more than a few lines in this story that had me crying because they were so profound. Have you ever typed something out and stopped to think, “whoa, that’s pretty amazing”?

What are some of your favorite things that have happened since jumping into the romance/erotic genre?

The community, by far. I love the conferences. I love the other writers. I love the enthusiasm, passion and loyalty of the readers. I love the strides indie romance writers have made in helping self publishing itself to grow and evolve and I love their generous spirit and the willingness with which they share their trade secrets with up-and-comers and colleagues. But on a more personal level, I love writing erotic romance. I love creating a world where characters are safe to follow and explore their heart’s true desires. Romance is about characters being rewarded for their vulnerability instead of punished for it.

If you weren’t writing, what do you think you would be doing today as a career?

That’s a tough one. One of my nerdy obsessions is commercial aviation, but I think I’d make a terrible flight attendant. I don’t have the patience. Honestly, anything where I could get paid to just read books all day. If I could just sit somewhere, with a pot of tea always close at hand, an e-reader and a pile of books, I’d be happy. Forever.

What would we find in your fridge right now?

Oh, lucky me. You’re catching me on a good day. I just got back from a trip to New Orleans where I ate every sauce in sight and now I’m trying to slim down a bit before the holidays. Kale, sliced pineapple, almond milk – those are for my morning shakes. Steaks I’ve already broiled so I can just heat them up. Spinach and sliced apples for salads. Diet Coke and Fresca and sparkling water. I’m glad you didn’t ask about my pantry. My pantry is where the junk food usually is.

Can you give us one of your funniest memories of your childhood?

I don’t actually remember this one, but apparently, when I was about three-years-old my babysitter took me to a local restaurant. Her ex-boyfriend walked in with his new girlfriend. Without any apparent idea who they were, I walked right up to the new girlfriend and asked her if she had a penis. We’re lucky the babysitter didn’t quit. Or sell me to someone.

I’m working on a top secret, two-book project with a collaborator I cannot currently name, but I’m incredibly excited about it and I think other people will be too. ‘Dance of Desire’, my all new Dark Nights novella, comes next February and it introduces a whole new world. Cowboys, country music, the Texas Hill Country, and forbidden romance. We’re also producing new episodes of The Dinner Party Show with Christopher Rice & Eric Shaw Quinn, my Internet radio show and podcast. We’ve got tons of Dark Nights author interviews coming this month, and many more in our archive. Jennifer L. Armentrout joins us on November 23rd and on November 29th we’ll have Dark Nights Fest 2015, where we talk to all the authors we haven’t had a chance to interview yet this year. New shows debut on our live stream on Sundays at 8 PM ET/ 5 PM PT and live listeners interact with each other on the show’s Facebook page, but the shows immediately become available as podcasts in our show archive. That’s where people can already find interviews with Heather Graham, Lexi Blake, Julie Kenner, Kristen Proby, Carrie Ann Ryan, Elisabeth Naughton, Larissa Ione and Liliana Hart, and all of the authors Dark Nights included in 2014.