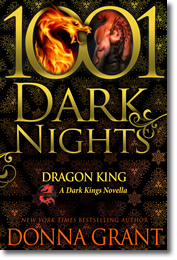 A Woman On A Mission

Grace Clark has always done things safe. She’s never colored outside of the law, but she has a book due and has found the perfect spot to break through her writer’s block. Or so she thinks. Right up until Arian suddenly appears and tries to force her away from the mountain. Unaware of the war she just stumbled into, Grace doesn’t just discover the perfect place to write, she finds Arian – the most gorgeous, enticing, mysterious man she’s ever met.

A King With a Purpose

Arian is a Dragon King who has slept away centuries in his cave. Recently woken, he’s about to leave his mountain to join his brethren in a war when he’s alerted that someone has crossed onto Dreagan. He’s ready to fight…until he sees the woman. She’s innocent and mortal – and she sets his blood aflame. He recognizes the danger approaching her just as the dragon within him demands he claim her for his own…

I loved this story so much and adored both Arian and Grace. What made you choose them for your novella?

Thank you! I’d had Grace as a character for a while, so when I was asked to write the novella, I knew she was perfect. I knew I wanted a Dragon King newly woken from their dragon sleep. When the story began to unfold, there was Arian!

Grace’s story as a writer was so relatable and I loved reading that vulnerability in a heroine. Have you ever struggled with writer’s block?

I’ve stayed away from writing a book about a novelist, but she was determined to have that as her career. Lol. I don’t get writer’s block. The closest I come is when the story isn’t flowing, and I realize it has something to do with what I’ve written that needs changed. Once I figure that out, I can move on with the story. I’ve found that doing mundane things where you aren’t thinking – i.e. mowing, working out, cleaning (gasp!), or even playing a few games on your phone – gives my brain a break and lets the story continue.

Arian and Grace together are just amazing. There is humor, emotion, and a ton of heat. Do you ever find it hard to incorporate all of those elements?

I write dark, so I know my books are going to have that element – as well as a pretty high heat level. I’m always shocked when people say there are humorous parts to my story, because I don’t feel I can write humor to save my life. 😀 I think if I tried to add in certain elements it wouldn’t work. I trust my brain/imagination and let the story flow.

I love the dragon element in this series and think it’s so different and fascinating to read. What gave you the inspiration to write dragons?

Dragons. Aren’t they great? I mean, what’s better than dragons? 😉 For years I’d tried to sell a dragon series. I even added them into one of my original series I first published, but nothing ever took off. Then my publisher came to me and asked me to spin off the Dark Sword/Dark Warrior series. I immediately said dragons, and they replied with a really loud “Yes!” I was beyond thrilled to finally get to write them – and in a world set in Scotland I wasn’t ready to leave. I’m beyond excited to be able to write about my Dragon Kings.

Another one of your series that I have devoured is your Dark Sword/Dark Warrior (Highlander) series. I know you also have a couple other series set in different worlds. Is it ever hard switching gears and writing in those different worlds?

My Dragon Kings are part of the Dark Sword/Dark Warrior world with the series heavily connected. You’ll see the Warriors and Druids show up in the Dragon King stories and vice versa, which makes it so fun as a writer. Those old characters I didn’t have to say good-bye to because they’re still around. 🙂

Sometimes I think it’s nice to switch gears and give myself a bit of a breather from one genre or setting. My DS/DW, Dragon Kings, and the upcoming Reapers (another spin-off) are all set in Scotland. My Chiasson/LaRue series is also paranormal, but it’s set in the bayous of Louisiana where I have family. Then there is my upcoming military/romantic suspense series – Sons of Texas – that is a total switch for me. Moving genres and settings pushes me as a writer to give more and do more with my characters. I love that.

The covers for all of your series are totally delicious. Do you have any covers that hold spots as favorites?

Thank you! I’m so proud of my Dragon King books. Those covers are very near and dear to my heart. After the first three full length books, St. Martin’s brought in someone in the art department who draws the dragons as close to what I picture them in my head as possible. To see them brought to life so is amazing. One of my biggest thrills are the days I get to see the first drawings of the dragons and tweaking the colors so they’re just right. As for a favorite – that changes with each new Dragon King cover that reveals because they’re that awesome. 🙂

A sleeping cat. Lol. I always have at least one cat on my desk. I’m freaking out a bit because I like a clean desk, which it’s not close to being at the moment. I’ve got papers everywhere from registering the kiddos for school and getting sheets from teachers saying what all they need. Then there are the school supplies that somehow ended up on my desk. Still trying to work that one out.

I had the pleasure of meeting your two wonderful children this summer and I’m curious to know what kind of books they enjoy reading? (and I’m hoping for a few recommendations for my own son. 😉

Awww. Thank you!!! My kids are huge readers. We just went to Barnes and Noble yesterday and bought a ton. My son loves to read the Halo books. They’re his favorite. At 13, he’s adamantly opposed to anything with romance in it, so he shies away from the YA section where his sister is usually found. Both of my kids love anything by Rick Riordan. They devour his books like candy, then spend hours talking about them.

My daughter at 16 is shying away from the typical YA novels. She read – and loved – the Hunger Games, Maze Runner, and Divergent series books, but she now looks for something grittier and different. She’s leaning towards John Green books now, though she loves James Patterson Confession’s of a Murder Suspect series. Her absolute favorite author is Julie Kagawa.

I’m working on SMOKE AND FIRE (April 2016), book 9 in the Dragon Kings. I’ll be done in a week, and then I move onto DARK ALPHA’S EMBRACE, book 2 in the Reaper series. Since both series are connected, it keeps me on my toes making sure I keep everything in order and straight.

Her childhood dream was to become a professional ballet dancer and study under the amazing Mikhail Baryshnikov. Though she never got to meet Baryshnikov, she did make it to New York City and performed in the Macy’s Thanksgiving Day Parade. Later, Donna’s love of the romance genre and the constant stories running through her head prompted her to sit down and write her first book. Once that book was completed, there was no turning back.

Donna sold her first book in November 2005 while displaced from Hurricane Rita, a storm that destroyed portions of the Texas Gulf Coast. Since then, Donna has sold novels and novellas to both electronic and print publishers. Her books include several complete series such as Druids Glen, The Shields, Royal Chronicles, Sisters of Magic, Dark Sword, Dark Warriors, and her new series, Dark Kings.

Despite the deadlines and her voracious reading, Donna still manages to keep up with her two young children, four cats, three fish, and one long haired Chihuahua. She’s blessed with a proud, supportive husband who loves to read and travel as much as she does.