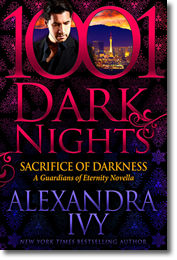 (A Guardians of Eternity Novella)

Javad has one rule. No fighting pits.

It doesn’t matter that the savage battles have been a tradition among demons for eons. As the manager of the Viper’s Nest in Vegas, his word is law. Period. Then he hears rumors that some fool has dared to create a fighting pit in the middle of the desert. He goes in search of the hidden location, only to realize too late it’s a trap by his former master Vynom. The powerful vampire is determined to force Javad to fight once again. This time to the death.

Terra is a rare fey creature known as a Seraf. Long ago she’d been captured by Vynom and forced to heal the fighters he used in his pits. Javad had rescued her, and she’d given him a medallion. If he ever needed her, all he had to do was to speak her name and the magic would lead her to him. When she hears his call she doesn’t hesitate to rush to his rescue. Even when it means returning to the dark violence that still haunts her dreams.

Can they escape the nightmare that nearly destroyed them in the past? And if they survive, are they willing to sacrifice the duties that have pulled them apart to battle for a future together?

An Exclusive Interview With Alexandra Ivy:

Oh, how I just loved Terra and Javad! Their story is phenomenal! How did you choose them for this novella?

I introduced Javad in Darkness Returns and then he made appearances in the next two books. I realized that he was becoming much more than a secondary character and I needed to write his story. Still, it took time to find the perfect mate.

I also love their names (and Levet’s!). How do you come up with your character names?

That’s weirdly one of the most difficult parts of writing for me. I start off with names that have meaning and reflect the character or give a feel for their personality, but sometimes I can be halfway through a book and realize it isn’t working because the name isn’t right. I can change it a dozen times before I finally write The End.

I love that you write in a few different genres. Is it ever hard to switch between them?

It’s my favorite thing! When I finish a book I’m ready for something completely different. I love the fact I can jump into a murder mystery or delved into fantasy. It keeps everything fresh, something that isn’t always easy after 20 + years.

What would find on your desk right now?

Ha, I write on my sofa in the living room so you would find a huge silver lab named Levet and an itty bitty mini aussie pup named Saint. They ride shotgun whenever I’m writing.

Summer is here and I’m always curious what my favorite authors did as their first summer job. What was yours?

I started babysitting when I was very young, but my first real job was at the local Dairy Queen. I have a fabulous story about the first banana split I ever made 😉

I’m working on edits for Shades of Darkness coming in November! It’s a Guardians of Eternity book and features Chaaya, my badass druid priestess and Basq, a warrior vampire with a mysterious past. So much fun!