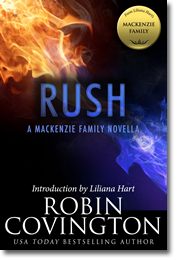 Atticus Rush doesn’t really like people. Years in Special Ops and law enforcement showed him the worst of humanity, making his mountain hideaway the ideal place to live. But when his colleagues at MacKenzie Security need him to save the kidnapped young daughter of a U.S. Senator, he’ll do it, even if it means working with the woman who broke his heart his ex-wife.

Lady Olivia Rutledge-Cairn likes to steal things. Raised with a silver spoon and the glass slipper she spent years cultivating a cadre of acquaintances in the highest places. She parlayed her natural gift for theft into a career of locating and illegally retrieving hard-to-find items of value for the ridiculously wealthy. Rush was the one man who tempted her to change her ways until he caught her and threatened to turn her in.

MacKenzie Security has vowed to save the girl. Olivia can find anything or anyone. Rush can get anyone out. As the clock winds down on the girl’s life, can they fight the past, a ruthless madman and their explosive passion to get the job done?

An Exclusive Interview With Robin Covington:

Thanks! I loved writing RUSH from beginning to end¼which isn’t always true with every book. (Sometimes you love them after you’re done.)

My first thought was, “hell yeah”! Any project with Liliana was going to be amazing and fun and interesting and I would be an idiot to pass it up. Since my Daddy didn’t raise any idiots¼here we are!

Atticus came to me more easily than Olivia. I love a good antihero – a guy who doesn’t always do the right thing and doesn’t let him keep up at night. Atticus grew up in the system, joined the Navy and became a SEAL and then when he left he struck out on his own as a mercenary. He isn’t wide-eyed and innocent so he not a fan of most people but when the MacKenzies need him, he’s there.

I wanted characters who were from the opposite end of the life experience spectrum and Lady Olivia couldn’t be more different. She’s the daughter of an English Earl and has grown up with privilege and wealth but she’s also grown up in a system or sorts – boarding schools and nannies – so they are more alike than they think. And she’s not perfect¼she likes to steal things and has made quite a career out of it.

You can see my inspiration board here, on Pinterest.

Nope! I started out writing in fan fiction forums and I’ve also written for another author to launch her world, so this was not a problem. Liliana’s series is so exciting and full on intriguing characters, there was so much to work with.

I started out writing fan fiction for ROSWELL (an old TV show about an epic love between an alien boy and a human girl) so I know how much fun it can be. If I were to choose a current TV show, it would be for HOW TO GET AWAY WITH MURDER. I would love to write stories with Oliver and Connor . . so fun and sexy!

Right now I’m writing my first male/male romance called Shadow Ranch. There’s a ranch (obviously), a bastard nephew of a wealthy family, a decades-old murder, a new murder and sexy times between a rancher and a Texas Ranger.

A USA Today bestseller, Robin Covington loves to explore the theme of fooling around and falling in love in her books. Her stories burn up the sheets. . .one page at a time. When she’s not writing she’s collecting tasty man candy, indulging in a little comic book geek love, and stalking Chris Evans. Don’t send chocolate . . . send eye candy! Robin’s books have won the Golden Leaf Award and finaled in the Romantic Times Reviewer’s Choice, the Book Seller’s Best and the National Reader’s Choice Awards. She lives in Maryland with her handsome husband, her two brilliant children (they get it from her, of course!), and her beloved furbabies.