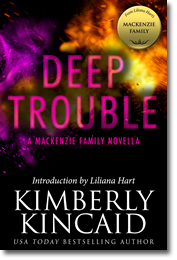 Bartender Kylie Walker went into the basement of The Corner Tavern for a box of cocktail napkins, but what she got was an eyeful of murder. Now she’s on the run from a killer with connections, and one wrong step could be her last. Desperate to stay safe, Kylie calls the only person she trusts—her ex-Army Ranger brother. The only problem? He’s two thousand miles away, and trouble is right outside her door.

Security specialist Devon Randolph might be rough and gruff, but he’ll never turn down a friend in need, especially when that friend is the fellow Ranger who once saved his life. Devon may have secrets, but he’s nearby, and he’s got the skills to keep his buddy’s sister safe…even if one look at brash, beautiful, Kylie makes him want to break all the rules.

Forced on the run, Kylie and Devon dodge bullets and bad guys, but they cannot fight the attraction burning between them. Yet the closer they grow, the higher the stakes become. Will they be able to outrun a brutal killer? Or will Devon’s secrets tear them apart first?

An Exclusive Interview With Kimberly Kincaid:

I’m so glad, because I loved writing it! As soon as Liliana told me what you all had in mind, I was hooked. Where else can a girl get the opportunity to flex her creative muscles *and* play with the hot, hot MacKenzie family? It was so much fun.

Truth—I have a soft spot for Thomas MacKenzie, and I knew I wanted to write a hero with wounds–but he also had to understand the bonds of family. Making him Cat’s brother (and Thomas’s brother-in-law) made perfect sense to me, so that when my heroine, Kylie, had a strong relationship with her own brother, my hero Devon would really get that. It all worked out too well to pass up!

One word: MacKenzies! It wasn’t tough at all. My new Station Seventeen series is going to be edgy and sexy and there will be loads of suspense, so it was a match made in Surrender.

I am really big on the Chicago series (Chicago Fire, Chicago PD, Chicago Med), and one of my favorite characters from Chicago PD is Mouse. He’s their tech guy, but he was also in the Army with one of the main characters who is now a detective. I think there would be a ton of opportunities to make his character really three-dimensional. So, yeah, Dick Wolf, if you’re listening and you want a story for Mouse, I’m your girl!

I’m finishing up the first book in my new contemporary romance series for Montlake called CROSSING HEARTS (February 2017), and I’m also working on the first full-length book in the Station Seventeen series, SKIN DEEP (September 2016). So for those of you who are looking for Kellan and Isabella’s story (they’re both in DEEP TROUBLE), you don’t have to wait too long!

Kimberly Kincaid writes contemporary romance that splits the difference between sexy and sweet. When she’s not sitting cross-legged in an ancient desk chair known as “The Pleather Bomber”, she can be found practicing obscene amounts of yoga, whipping up anything from enchiladas to éclairs in her kitchen, or curled up with her nose in a book. Kimberly is a USA Today best-selling author and a 2015 RWA RITA® finalist who lives (and writes!) by the mantra that food is love. Kimberly resides in Virginia with her wildly patient husband and their three daughters.