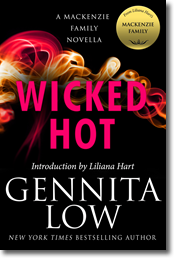 A US operative/businessman had been kidnapped in Indonesia. He has a vital piece of information that would get the US government in trouble. But Indonesia is a country with with over 17000 islands, with plenty of jungles in which to hide.

Off-the book NSA fixer, Kirk Ryan, approaches his cousin, Archer, who works at the MacKenzie Securities for help with tracing a phone call. He also needs a translator familiar with Indonesian. Not a problem. MacKenzie Securities’ troubleshooter, Jade, has plenty of connections. In fact, there is a translator she knows who is in Indonesia right now.

Surya, GEM contract agent, really doesn’t want to do anything but lie on the heated beaches of Indonesia and just enjoy her first holiday in years. But she owes Jade Jax a favor and her friend’s calling it in. And the favor comes in a six-foot-two package of irresistible and wicked male. It’s just a translation job. She would help and maybe get to know the man for a day or two. What could go wrong?

An Exclusive Interview With Gennita Low:

Since I’m using Mary MacKenzie’s funeral as the starting point, I brought in my own SEALs because they would know Shane and some would have visited the MacKenzies. I needed a troubleshooter/negotiator, an outsider who could help Declan, so I created Kirk Ryan, who is Archer’s cousin. Since my story will be set in Indonesia and my negotiator would need a translator, I brought in a GEM operative heroine, Surya. GEM is my special contractors team specializing in translations and negotiations for foreign organizations, such as the WHO and UN, especially in Second and Third World countries. Surya is a play on “suria” which means “dawn” in Bahasa Melayu. In Wicked Hot, my characters are facing an end to a part of their lives, including the bad guy character. Whether it’s a dead end or a a new “dawn,” is up to them, of course.

No. I enjoyed this process very much. I tried to meld my style with the other author’s by studying her characters as much as I could. It was both fun and challenging because I was deliberately holding back a bit of my own style. Crafting a plot using elements from someone’s world is a lot of work!

The latest episode of Lucifer

NAKED, another mashup of my world with JA Konrath and Ann Voss Peterson’s CODENAME: CHANDLER series. I’m trying my hand in a prequel–a tracing of how my readers’ favorite character, Jed McNeil, met Chandler when they were both very young and were training to be the super spy-assassins that they became in the later books. Another challenge because now I have to write them young and…kind of different, and yet, not.

I hope to get NAKED out either end of April or mid-May.

Want an update? Subscribe to my newsletter–Jenn@Gennita-Low.com, with Newsletter as topic. No spamming, just news about upcoming projects and the first scene or chapter.

Thank you for reading my book!

New York Times bestselling author Gennita Low writes sexy military and techno spy-fi romance. She also co-owns a roof construction business and knows 600 ways to kill with roofing tools as well as yell at her workers in five languages. A three-time Golden Heart finalist, her first book, Into Danger, about a SEAL out-of-water, won the Romantic Times Reviewers Choice Award for Best Romantic Intrigue. Besides her love for SEALs, she works with an Airborne Ranger who taught her all about mental toughness and physical endurance. Gennita lives in Florida with her mutant poms and one chubby squirrel.