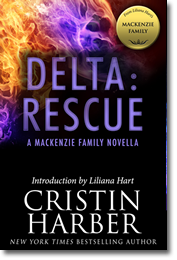 When Luke Brenner takes an off-the-books job on the MacKenzie-Delta joint task force, he has one goal: shut down sex traffickers on his personal hunt for retribution. This operation brings him closer than he’s ever been to avenge his first love, who was taken, sold, and likely dead.

Madeleine Mercier is the daughter of an infamous cartel conglomerate. Their family bleeds money, they sell pleasure, they sell people. She knows no other life, sees no escape, except for one. Maddy is the only person who can take down Papa, when every branch of law enforcement in every country, is on her father’s payroll.

It’s evil. To want to ruin, to murder, her family. But that’s what she is. Ruined for a life outside of destroying her father. She can’t feel arousal. Has never been kissed. Never felt anything other than disgust for the world that she perpetuates. Until she clashes with a possible mercenary who gives her hope.

The hunter versus the virgin. The predator and his prey. When forced together, can enemies resist the urge to run away or destroy one another?

An Exclusive Interview With Cristin Harber:

Working with Liliana has been a dream come true! Any project with Liliana would be absolutely amazing – I love MacKenzie books and I think that my Titan guys work well with MacKenzie boys and I’m really excited about it.

I chose Cade because Cade chose me – he’s my favorite. I read the books long before I knew Liliana as an author. Cade is my guy and I just knew.

It wasn’t difficult – it was interesting. It was a really exciting challenge. It also gave me the opportunity to go back and re-read MacKenzie series of her books which was really just a guilty pleasure.

I’m currently in the editing stage for Delta: Revenge (Javier’s story) which is a full length book to be released in spring 2016. Like the other Deltas and Titans, it can be read as a stand-alone and does not have a cliffhanger. Delta: Rescue is about Luke and you will see bits of him in Revenge.