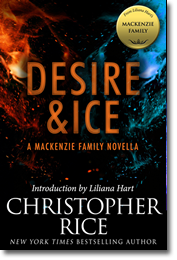 Danny Patterson isn’t a teenager anymore. He’s the newest and youngest sheriff’s deputy in Surrender, Montana. A chance encounter with his former schoolteacher on the eve of the biggest snowstorm to hit Surrender in years shows him that some schoolboy crushes never fade. Sometimes they mature into grown-up desire.

It’s been years since Eliza Brightwell set foot in Surrender. So why is she back now? And why does she seem like she’s running from something? To solve this mystery, Danny disobeys a direct order from Sheriff Cooper MacKenzie and sets out into a fierce blizzard, where his courage and his desire might be the only things capable of saving Eliza from a dark force out of her own past.

I was thrilled. When she asked me, my writing schedule was packed to the rafters. Not a bad place for a writer to be. But it means you have to turn down exciting opportunities. After some agonizing over stress levels and calendars, I decided I was determined to make this one work. I’d just signed a contract for a major project, a top-secret collaboration with my mother novelist Anne Rice (which I’m not yet allowed to discuss in detail), but I delayed starting on it just so I could write this story. I love the way Liliana blends sexy crime fighters with a rugged, beautiful Montana backdrop. The opportunity to play around in her world proved irresistible.

I’d been wanting to write something with a hot young cop for a while. This story was the perfect fit for it. It’s one thing to depict guys in their twenties as being physically sexy, but I wanted to craft a hero who also had all those pure, idealistic qualities we sometimes associate with youth in a positive way. Idealism, endurance, a tendency to dismiss authority figures when they’re off the mark. That’s Danny, and all those qualities make him a very sexy hero, I hope. And I always like my romances have a dash of the forbidden. In this case, Danny fell in love with the heroine when she was his high school English teacher. Back then, he didn’t act on his attraction. Now that they’re both grown up, however, everything’s fair game!

Not at all. The hardest part of the writing process for me is crafting a first draft of an original work. Revising it is so much easier, and it moves so much more quickly. When you’re writing in someone else’s world, it’s almost as if the first draft of your piece has been written for you, and you’re deepening and exploring what the author of the source material has already built.

Gosh, that’s a hard one. I watched some recent episodes of BLUE BLOODS and they left me wanting to write a steamy ménage involving Officer Jamie Regan, played by Will Estes, and his partner, played by Vanessa Ray. They’re both smoking. (Can you tell I have a cop fetish?) I guess I’ll cast myself as the third.

My latest contribution to the 1,001 Dark Nights series, DANCE OF DESIRE, releases later in February. It’s my first original non-paranormal, contemporary romance. And there’s a cowboy in it. A really hot cowboy. And a beautiful town in the Texas Hill Country called Chapel Springs. In the meantime, as I said above, I’m working on a top secret project with my mother, novelist Anne Rice. I’m dying to tell you more about it, but they’ll probably disappear me if I spill the beans too soon. My best friend Eric Shaw Quinn and I are taking our Internet radio show and podcast, THE DINNER PARTY SHOW to the world of video later this spring. Make sure you’re subscribed to our You Tube channel if you want to get the most recent content from us in 2016.