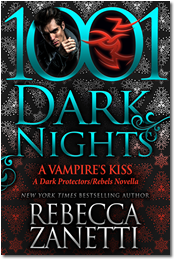 Unlike several of his brothers, Athan Maxwell accepted the curse inherent in his DNA and solved the problem a century ago by mating his one true mate and saving her life at the same time. Now they only meet up four times a year to exchange blood and keep themselves healthy because that was the deal. Yet after a hundred years, his mate has only become more beguiling and intriguing, and when he discovers a new threat on her tail, his promise of sitting back and leaving her alone goes right out of the window.

Ivy O’Dwyer has enjoyed the last century as an immortal being, evolving from being a farmer’s daughter to the successful CEO of an Internet company. Sure, life gets lonely without the chance to date, and yes, she’s grateful to her vampire mate for saving her life so long ago, and yet the dreams she has of the sexy male won’t desert her. So when he storms in to save her life, in all vampire-possessive mode, it’s difficult to stand her ground. Unfortunately, when they finally discover that living forever but alone isn’t worth it, it might be too late.

An Exclusive Interview with Rebecca Zanetti

We’ve been friends long enough and had several adventures – I think you’d do a fantastic job narrating my life.

Don’t hold yourself back. Forget the fact that your first grade teacher or your grandma might read your book – and just write whatever is in your head. Also don’t keep things for a later book – put it all in this one. New ideas will always come later for those books.

He desperately needed this, and he needed her. With her, the rest of the world and competing pressures faded away. He could be just Garrett Kayrs and not the future king, the Grizzly enforcer, or a member of the Seven. Right now, he was just hers. (Garrett’s Destiny, newest Dark Protector book).

Jason Momoa. For anything. Always.

Dragons. I think they’d be a lot of fun to ride. 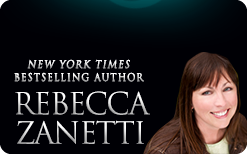