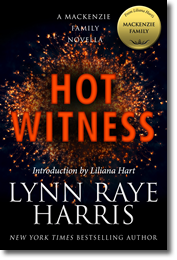 The MacKenzies partner with the Hostile Operations Team to protect a woman who witnessed a crime from a notorious mobster.

Thank you! Well, when Liliana first approached me, I was super-excited. I mean I’m a MacKenzie fan and a Liliana fan—and I envied the authors in the first project, so I was raring to go when she asked. I thought that mixing up my HOT world with Liliana’s MacKenzies was a great opportunity to tell a fun story!

My ideas are always a mixture of crazy stuff I’ve read in an article or watched on television. So I’d watched a program about the kinds of things hackers could do, such as taking over a car’s computer, and that sparked an idea. My husband was also watching Ink Masters, and I kind of got into it. The artistry of those people is amazing! There were several women competing, and they were all really good. Eva Gray came from Ink Masters. And Jake “Harley” Ryan just sort of popped up in my head as this fully formed badass special ops dude who’d once been a biker. It all went from there!

It really wasn’t! I’m a MacKenzie fan, so I knew what the world was like. I knew that Declan is the big boss, and what kind of guy he is. I thought if I could get him working with my Hostile Operations Team, I’d have a blast. And I was right!

Oooh, choices. I might be red because red is vibrant and hot. I might also be purple because purple has that little bit of coolness to take the edge off. I love both colors!

The news? If not the news, then probably HGTV. I love Fixer Upper!

More HOT and HOT SEALs! Book 10 in the HOT series is coming April 11th, and then the ultimate book, the one about Colonel Mendez, is coming in July. Readers have been waiting for him and I can’t wait! When I started HOT, I never thought the colonel in charge would be a hero in his own book—he’s almost fifty!—but readers really want him. After that, there will be SEALs. And maybe something new, like a billionaire or two!

Lynn Raye Harris is the New York Times and USA Today bestselling author of the HOSTILE OPERATIONS TEAM SERIES of military romances as well as 20 books for Harlequin Presents. A former finalist for the Romance Writers of America’s Golden Heart Award and the National Readers Choice Award, Lynn lives in Alabama with her handsome former-military husband, two crazy cats, and one spoiled American Saddlebred horse. Lynn’s books have been called “exceptional and emotional,” “intense,” and “sizzling.” Lynn’s books have sold over 3 million copies worldwide.ree dogs.