Special books with their own special contest to win…

a silver lock necklace from Tiffany & Co. – where else? 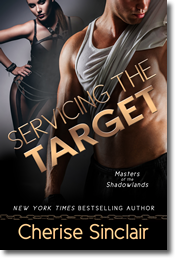 (A Masters of the Shadowlands Novel)

Now, he’s set his sights on the beautiful Shadowlands Mistress. Maybe he’d considered himself vanilla, but she can put her stiletto on his chest any day, any time. He’ll trust her delicate hands to hold his heart. And if she wants to whip his ass on the way to an outstanding climax, he’s just fine with that too.

Sure, he knows she likes “pretty boy” slaves. And he’s older. Craggy and rough. And six-five. Minor hindrances. The mission is a go.

An Exclusive Interview With Cherise Sinclair:

I’m so glad you enjoyed Servicing the Target. Thank you!

Okay, I have to admit that I’d never planned to write about a submissive hero, so when Mistress Anne told me it was her turn for a book, I was… Ahem. Right. I wasn’t exactly…pleased. (See how I’m using such nice, polite language for this interview?)

But when it came to decide how their relationship would work, well…there is no one-size-fits-all submission. I’ve run into quite a gamut of male submissives—from a guy in his fifties wearing a sissy maid outfit to very androgynous, sweet service submissive to a huge, muscular guy whose posture alone was a “challenge.”

Having already met Ben, y’all know that he’s a complete opposite to Anne’s usual pretty-boy submissives. I started off unsure about what to do, but, to my relief, Ben didn’t leave me any leeway about what he wanted. He simply laid out who he was and what he’d do.

And he did the same with Anne the first time they were in the dungeon:

Ben is by far one of my favorite characters in that he is so multi-faceted with his background, hobbies, and personality traits. Do you ever find it hard to come up with such beautifully layered characters?

Some personalities are easier to work out than others are, but if I have problems, it’s often because I’m not listening. (Yes, the characters talk to me. Yes, I probably should reserve a room in a mental health facility <g>. ) Or sometimes the problem is that, as a typical female, I avoid conflict, even for the people in my books. So when I realize that they’re proposing a background or personalities that’ll make them unhappy, I try to ignore their hints.

Needless to say, eventually I have to listen, because they have to suffer—as do we all—in order to earn the happy ending.

Mistress Anne is an amazingly strong heroine and she’s a formidable opponent in a fight. Was it challenging to write such a strong female?

Everyone—well, everyone I know—has both strengths and weaknesses. Upon initial appearance, the Mistress is a scarily strong female, able to outfight, outshoot, and totally dominate most men.

And yet, she’s almost heart-breakingly vulnerable.

The challenge was not in writing about a tough female, because I think we’re all stronger than we know, but in fitting the pieces of the Mistress puzzle together so we could see how her talents and limitations combine to make a complete person.

I loved seeing glimpses of some of our other favorite Shadowlands characters in this book. Is it ever hard to choose who will make a cameo in a book?

Oh, sheesh, choosing whom to focus on is almost impossible. And the readers scold me if they feel their favorites were neglected.

However, everyone wants to know how the previous couples are doing, so if I can tie an update into the story, then I’ll go for it.

With this book, since I have readers who adore the male Dom/female submissive dynamic, I wanted some treats for them. So, since it was time for Jessica to finally have Master Z’s baby (longest pregnancy evah!), I let myself get carried away with their subplot. (Readers—your gratitude can take the form of chocolate. <g>)

I also love how you show the family atmosphere with the Doms and subs in committed relationships. Are people ever surprised that you show that side of things?

And I love showing that lifestylers aren’t all about the club and that a D/s dynamic can be part of daily living.

Taking that a step further…I like showing how change is part of life and that to keep what’s important means compromise—and a fair amount of juggling skills.

The summer time is in full swing! What are some of your favorite summertime things to do when you’re not working?

Last year, after trying apartment living (serious FAIL), my dearheart and I moved to a few acres out in the boonies. I’m most content when I can have my fingers in the dirt. Planting and weeding and watching things grow—whether with a story or in the garden—these are my joys.

We’re in the Pacific Northwest and close to my siblings, so there’s nothing nicer than having people over for a leisurely afternoon BBQ—which means my DH gets to do the cooking. <g>

What would we find on your desk right this moment?

A pot of tea and a cup as well as a giant mug of coffee. (A caffeine addiction isn’t to be taken lightly).

Notes from what I jotted down at 3 am last night. (It’s always fun trying to decipher notes written in the dark when half-asleep).

A sketch of the town of Cold Creek for the next book. (Because it’s embarrassing when I get lost in my own made-up town).

A pen from Monet’s gardens in France—my new favorite kind of souvenir.

My cell phone. (Although when the damn thing rings during writing time, I’ve considering testing the robustness of the septic system).

And last, but not least, two oversized computer monitors…because one just isn’t enough. You know, when technology advances to display Word documents on the walls, I’ll undoubtedly whine at my dearheart, “Honey? Can I get an octagonal office?”

I had been working on the third in the Wild Hunt Legacy paranormal series last fall when I ran into the deadlines for Master of Freedom and Servicing the Target. So, now that those books are turned in (yay, I met my deadlines!), I’m back working with the werebears.

There’s a certain joy in writing paranormals. I’ve missed the…wonder…of the other world. And now, I’m back to watching for flower pixies in the garden and seeing gnomes peeking up from under the stairs.

Jilly, thank you so much for having me here on Read-Love-Blog today. It’s always a delight to visit your home on the web. But…I’ve been wondering, did you know you have handcuffs under the couch here?

Having to wear glasses in elementary school can scar a person for life.

Dubbed a nerd at an early age, Cherise Sinclair has been trying to live up to the stereotype ever since. And what better way than being an author?

Cherise lives in the Pacific Northwest with her husband. Their two fledglings have left the nest recently to try their wings and hopefully will fly high and strong. The “ascendant erotica queen” (Rolling Stone Magazine) now spends her days writing with occasional supervision from a sadistic calico cat.